self Care for Care of the Self 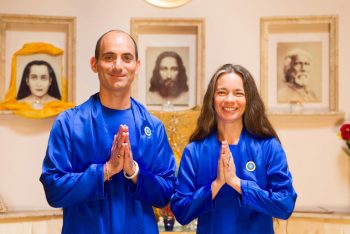 Years ago Swami Kriyananda was part of a yoga documentary called “The Titans of Yoga.” The film depicted yoga’s journey through the lens of some prominent mostly very fit hatha yoga teachers.

At the time, Swamiji was about 85 years old and needed the assistance of a wheelchair to attend the event. He was probably the only one who was doing the chair pose sitting down!

After the screening some of the cast came onto the stage for questions and answers with the audience. A number of young trim bodies walked forward followed by Swamiji in his wheelchair. He joked that he did not look like a “Titan of Yoga.” However, all of the other teachers felt his devotional posture as a close, direct disciple of Paramhansa Yogananda. Sweetly, they acknowledged each other with universal namaste greetings.

When it was Swamiji’s turn to share with the audience, he expressed how the movie touched him deeply. He saw how yoga journeyed a long way from interest in “slimming your hips” and physical well being to love for God and awakening one’s latent spiritual greatness.

Towards the end Swamiji commented, “The only thing is I don’t know about all of this talk of loving yourself…” The phrase “learning to love myself” and variations of it were often used in the movie. He paused briefly and said to the audience, “Love the Self.”

Swamiji was touching on a subtle but very important point— that we don’t miss the point! He was reminding us of the most titanic of all yogas: renunciation of the ego through deep love for God.

During New Year’s we tend to focus on resolutions through outward changes: no more sugar, eat better, and/or start that much needed exercise program. Self-care practices are important in their proper context. As Paramhansa Yogananda said, “Keep the body fit for Self-realization.”

And yet the deeper purification we truly seek is purity of heart. How, then, do we cleanse our hearts and keep them a fit temple?

During a recent trip to Mexico, Dharmadevi and I met a Mayan shaman who told us the remarkable story of his spiritual training.

At the age of nine, to begin his shamanic training, he along with about 30 other youngsters were invited to a spiritual test. Since he wanted to become a shaman, he accepted the challenge.

The spiritual elders led the young boys into a deep subterranean cave in the Mayan jungle. After trekking some 300-400 meters underground, their elders gave them two things: a candle and a bottle of water. The test was simple: He had to escape the underground labyrinth on his own.

After a few hours on the first day of the test, his candle extinguished. With his eyes wide open all he could see was complete darkness. While only trusting his outward senses, he was overwhelmed with anxiety and fear. He heard worries howling in his mind not to mention other boys screaming at the top of their lungs for help.

Then like a warm breeze he remembered a sage piece of advice his grandfather gave him before the test. “Some of you will forget, but heed my words: close your eyes and open the eye of your heart.” Integrating this advice into action, he did just that. Taking a deep breath in the darkless dark of the cave, he closed his eyes. Almost instantly he felt the “eye” of his heart open. When his heart opened an inner calm and poise descended upon him giving him the strength to intuitively find his way out of the cave.

After four days, he emerged from the cave passing the spiritual test and became a shaman. Only three other young boys passed the test.

His story reminded me of the account in the Gospel of Matthew, when the Pharisees complain to Jesus that his disciples break the tradition of the elders because they do not wash their hands before eating. Jesus responds:

Listen and understand. What goes into a man's mouth does not make him 'unclean', but what comes out of his mouth, that is what makes him 'unclean’.

So let’s remember our New Year's resolutions in this light. When we cleanse our heart of fear and any meanness that obscures its innate purity, we open the eye of our heart. Then we can learn self-care for care and love of the One infinite Self of all.